When 19-year-old Valeria Alvarado voted in her first presidential election in 2016, she voted for her undocumented friends and family members who didn’t have a voice but had the most to lose. Unfortunately, President Donald Trump – who amassed a following by demonizing Muslims, the undocumented community, and other vulnerable groups – won, and confirmed her worst fears. Now, the Monterrey-born, second-year Villanova University student is springing into action in the wake of Trump’s sweeping immigration orders.

On Wednesday, his administration put into motion its plan to strike down sanctuary cities by threatening to defund those that won’t detain undocumented immigrants for the US Immigration and Customs Enforcement (ICE). That much we knew, because on the campaign trail, Trump first announced his plans to dismantle sanctuary cities by withholding federal funding. But his executive order goes further than trying to force cities to cooperate with ICE officials, it’s also aiming to prove that offering undocumented immigrants protection results in rising crime. “To better inform the public regarding the public safety threats associated with sanctuary jurisdictions, the Secretary shall utilize the Declined Detainer Outcome Report or its equivalent and, on a weekly basis, make public a comprehensive list of criminal actions committed by aliens and any jurisdiction that ignore or otherwise failed to honor any detainers with respect to such aliens,” the order reads.

In response to this, I'll be starting a weekly list of accomplishments by undocumented immigrants. DM me if you're interested in helping. https://t.co/ZiGZvLCmka

In response to this egregious and revolting report – which will include everyone from undocumented immigrants to permanent residents – Alvarado is publishing her own counter-list. She’s in the midst of working on an interactive platform called We, Too, Are America, which will highlight the undocumented community’s accomplishments and contributions on a weekly basis. She and her small team will roll out the first story on February 5, and then each Monday following that. “I could not believe my eyes when I first read Trump’s plan to publish this list,” she told me. “This ‘crime list’ idea is not new. The Nazis used to publish a list of Jewish crimes before the genocide started. The RTML radio in Rwanda used to convince people that Tutsis were to blame for the crimes of the few. I am not trying to homogenize these situations with each other, but it is unbelievable that we are repeating history’s same mistakes.” 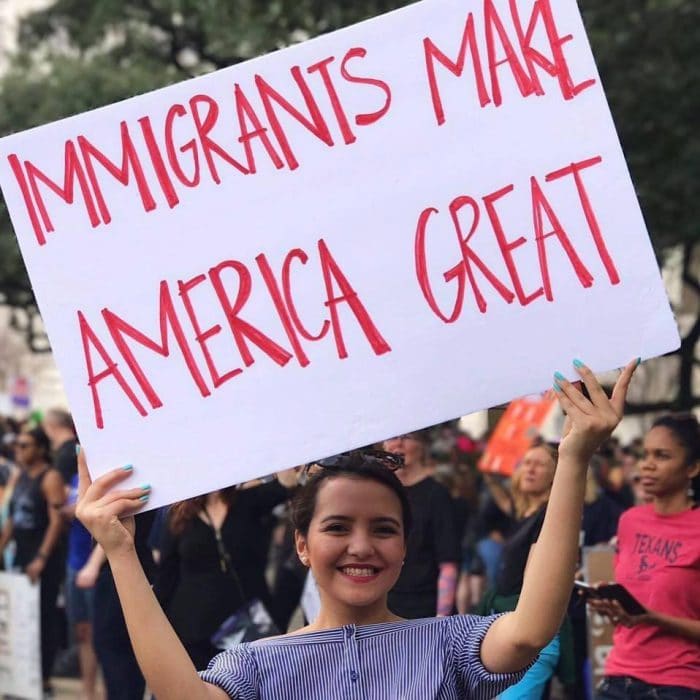 Throughout his campaign, Trump invoked the death of Kathryn Steinle to prove that sanctuary cities bring increased crime. In 2015, a Mexican national with a criminal record allegedly shot Steinle in San Francisco’s The Embarcadero. Before Steinle’s tragic death, he had a 20-year-old drug charge. But because a judge threw the case out, he could walk free, despite being sought by immigration officials. Trump and others on the right have continued to use this case – and other similar ones – to denounce sanctuary cities, but the truth is, immigrants are much less likely to commit crimes than those born in the United States, the Washington Post reports.

Additionally, a new study conducted by University of California-San Diego political scientist Tom K. Wong found that sanctuary cities are actually safer. “For the first time we’re kind of seeing that crime rates are lower when localities stay out of the business of federal immigration enforcement,” Wong said, according to NPR.

Alvarado – who’s gone from immigrant to citizen – understands that the immigration system needs an overhaul. Trump, on the other hand, sees immigration as a black-and-white issue, where he accepts immigrants who come through the proper channels (and even then he’s selective) and denounces those who don’t, regardless of their circumstances. He’s not the first to do it, but Trump has continued to successfully single out undocumented immigrants as the antagonists in the US’ story. With her aptly titled platform, Alvarado seeks to dispel his words by mostly focusing on undocumented immigrants’ stories.

As Alvarado and her team prepare the platform, you can follow the Facebook page for more updates. And if you want to share your story, reach out to We, Too, Are America here.

Walmart To Invest $1.3 Billion In Mexico
Maluma Achieves No. 1 & 2 on Latin Chart