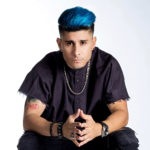 La cancion se llama el “Reemplazo“. It is written and produced by Soulbots and Genio El Mutante. Its about moving on from a bad relationship that was weighs you down and replacing it with a better one, something like living your best life. El video just passed 2 million views on YouTube.

JP and crew shot the video in LA with no other than Jose Omar who is currently on tour with Jennifer Lopez. An extraordinary director who’s worked with Justin Bieber, J Lo, Janet Jackson and many others. Escucha a JP Catillo en Spotify y Soundcloud. You can follow him on Facebook, Instagram and Twitter.

Continue Reading
You may also like...
Related Topics:JP Castillo