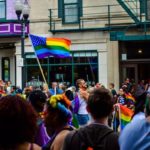 The Hialeah Pride festival is organized by the Hialeah Pride organization, celebrating the LGBTQ spirit. Just like the human spirit, music has no boundaries, it doesn’t divide.

On October 7, Hialeah Pride will debut at the historic Hialeah Park. It’s an apt venue in that the organizers Karen Larrea and Madeline Fernandez are making history themselves. Furthermore, they chose October because it’s LGBT History Month.

New Times Miami spoke with Fernandez, a native of Hialeah who also spent time growing up in Miami Beach. Before we could ask, she answered the most obvious and pressing question: Why Hialeah?

“There’s an LGBT community in Hialeah, and they don’t have their own festival. I feel like they need a safe place to go as well.” says Fernandez.

“The one thing we are going to have that’s different from other prides is that usually they separate transgender [individuals] and give them a tent. They’ll give the women a tent. For the gay men, they get the main stage and stuff like that. At this pride, the main stage is going to have entertainment for everyone,” Fernandez says, emphasizing that last word: everyone. Read the full interview here.

The full lineup is still being confirmed (aside from DJ Citizen Jane, Kaseeno, David Fernandez, Veronica Vegas, already locked in), but Fernandez promises Hialeah Pride will offer a full day of music and entertainment from local areas such as Hialeah and beyond.

The essence of music is to celebrate the different shades of life. Music is the only platform that allows you to experience and enthrall in the essential freedom of the human spirit, irrespective of your gender, race, religion, or sexual orientation. It would not be wrong to say that music has the power to bring us all together as one, making us believe that we are all one despite our differences.

In fact nothing celebrates difference like music. This is why people from all over the world enjoy listening to music in different languages that they might not even understand. Here is the current line up: