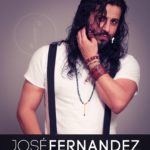 José Fernandez was born to an Andalusian gypsy family, where most were musicians. From his grandfather, a well-known Flamenco singer & poet, to his father; a great bass player. He inherited a fiery gypsy temperament and a keenly developed artistic sense.

José launched “Makhlouta” in the summer of 2002. El album  “Makhlouta” is a Lebanese dish that mixes vegetables and beans. Jose’s album after was a fusion of musical “Ingredients” including Middle-Eastern, Flamenco, Brazilian, funk and swing.

He has also collaborated in the arrangement of “Corazon Partio“, Alejandro Sanz’ song, sang by the Spanish flamenco singer, Duquende. José continues to enhance his career to gratify his motivation. In summer 2018, he released his long awaited album “El Momento” which combines his powerful yet heart melting voice and music fusion to continue to make listeners sail around the Greek islands, inhale the scent of morning blooms, taste the spices of Morocco and sense the warmth of the sun in Malaga .