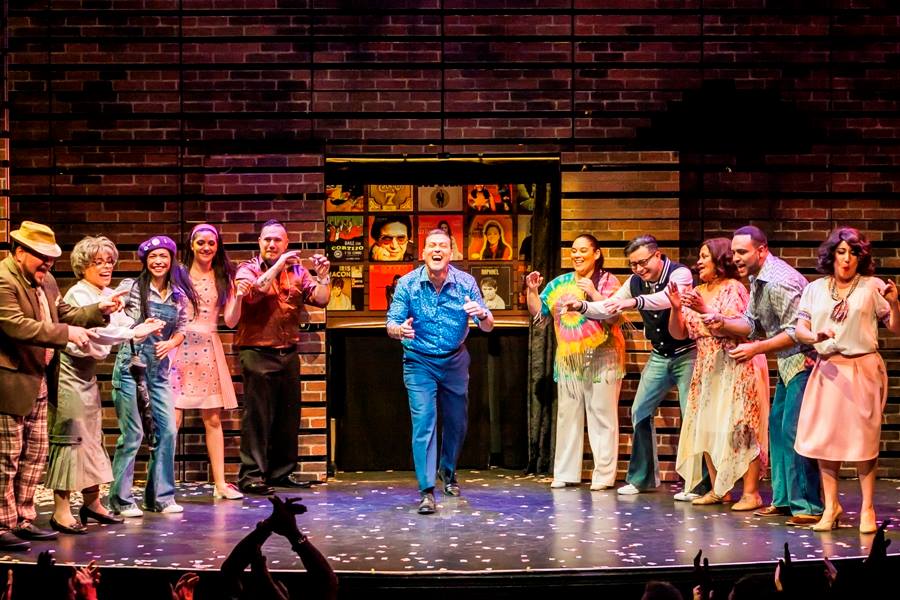 I Like It Like That: A New Musical continues its successful run at the Puerto Rican Traveling Theatre stage! Written by David Maldonado and Waddys Jáquez, the Tito Nieves, Nuyorican inspired production illustrates, through song and dance, the story of a family living in “el barrio” during the 70’s, a time when Salsa “was the Religion of the masses.” The legendary star, Domingo Quiñones, plays the lead role of el don, Roberto Rodriguez, who works tirelessly at his record store and at home with his wife Carmen (Shadia Fairuz), to raise his four children: Juan (Gilberto Velázquez), Carlos (Joseph “Quique” González), China (Caridad De La Luz) and Paula (Joseph “Quique” González). Roberto’s fight to protect his children against the negative societal influences and lost souls that roam Spanish Harlem, accurately depicts the timeless narrative of the Latino parent in the hood. Quiñones metaphorically delivers “Agua Que Va Caer” as a warning sign of the imminent storm, all while dancing with a hopeful spirit for the calm and a better tomorrow.

With the Rodriguez family it truly takes a barrio, as neighbors Tita (Rossmery Almonte) and Rafa (Angel Lopez), are a vibrant extension of support to the unified family. Heavy themes such as civil and human rights, drugs, and the thin line between reaching success and escaping your roots, are all lightly explored. An unseen seven-man band led by Desmar Guevara help carry the plot along, with original and traditional Salsa songs like “I’m Cooking” and “Mi Libertad” that create a comical and lighthearted atmosphere. The more semi-serious undertones of the musical stem from scenes in which the eldest son, Juan, unsurprisingly falls for the femme fatale, Maria Luisa (Chachi Del Valle). I couldn’t help but notice a parallel between the red dress wearing seductress and Lady Macbeth. Juan’s temptations for sex and drugs are personified by three evil, homeless-looking characters, that lurk (dance) around. They can be compared to the three witches in Shakespeare’s Macbeth. Del Valle’s undeniable talent makes a greater impression after realizing that she plays a total of three characters, including an elderly woman named Babilonia, and Lupe, the queen of Latin Soul, in one of the production’s most impressive musical numbers, “El Carbonero.”

The wardrobe, designed by Hochi Asiatico, is complete with polka dots, bell-bottom pants, and flared sleeves, undeniably translating the tackiness of the 70’s. The stage, although small, is propped with a backdrop wall designed with a multi-purpose light projector to facilitate the change of setting from Roberto’s record store, to Juan’s prison cell and more. In addition to the light projector, a small screen on the backdrop is used to creatively display English lyrics of Spanish songs, maximizing the experience of those attendees who may not be fluent in the latter. References to Iris Chacon, Valencia Bakery, and Corso nightclub are a few of several Puerto Rican insiders that will undoubtedly prompt a feeling of nostalgia among some attendees. I Like It Like That will make you laugh, clap your hands, tap your feet, you may even feel the urge to get up and dance a little before the usher comes and politely asks you to take your seat. Head over to the Puerto Rican Traveling Theatre stage and experience the critically acclaimed smash hit musical, which has extended through January by popular demand! Don’t miss it!